I haven't written about Crohn's in a while because part of the battle of dealing with a chronic illness is that it can kind of be depressing and people sometimes don't understand that you may need to talk about it and it's not because you're trying to complain or get sympathy. It's hard and some days are REALLY hard and after a few weeks of only days that are hard and really hard, it's time to talk about it. Like it or not, that's where I am at tonight.

A few months ago my gastroenterologist decided that labs were coming back great and I hadn't been admitted to the hospital in a while but my Crohn's was still showing no signs of going into remission. We had my Remicade infusions on an every 8 week schedule but I was still going into a full flare by week 6 until about a week after each infusion (essentially still spending almost half of my time in full flare mode). The only thing that keeps me out of the hospital at this point is that I rarely heal from one fistula to the next so my tissue has no time to repair before it's ripped apart again and due to that lack of strength and healing time, that breakdown is doing part of the job my surgeon would be doing if I went in. My gastroenterologist thought we should get a little more aggressive with the Remicade and change me to an every 6 week schedule.

In September I had my first infusion at the 6 week mark and wouldn't you know it, I was doing great and then flared at the 4 week mark (again, like before, 2 weeks before my infusion). I was shocked but thought maybe my body was just off and after my next Remicade, I'd start to feel better again. I had my 2nd infusion on the new 6 week rotation 4 weeks ago now but I never got any relief. I've essentially been in between hard and really hard days for 6 straight weeks now with the last 2.5 being nothing short of torturous on my body. The last 3 days have had me praying like a mad woman and the husband and I going back and forth on whether it was time to make the long drive to the hospital. On Sunday night I looked at him and said, I think I'm down for the count. He asked if that meant I was ready to go and I asked for 2 more days. He said, I just wish there was something I could do for you and I thought about it (wishing there was something too) for a minute and responded, you could come pray with me. My husband looks hard at me, immediately turns off the tv, and comes and sits down on the couch where I'm laying, grabs my hands, and starts to pray, hard! Yes, I'm seriously blessed by him and will never forget that I am married to a very special man!!! I don't know the reason for my struggles but I never doubt God has a plan for them.

Since Sunday night, I have been "down for the count" with a few moments of short lived attempts to throw in a load of laundry or make food and read about a hundred random texts from my husband while he's at work making sure that I'm "relaxing" or  "resting" (both in quotations because they are nearly impossible when you are in pain). The pain has been increasing at a steady rate with tonight bringing me to a point where I almost asked my husband to come home. I decided to play doctor on myself (I'll spare you all the details) and have finally got some of the pressure of one of the abscessing fistulas to release but I'm definitely 'not out if the woods yet." With that being said, I'm sort of laying/sitting on a heating pad right now so the heat can draw more of these nasty "toxins" out of my body so the swelling can go down, I can get some healing going on in this "broken" body, get some strength back, get my booty out of bed, and get back to life as I know it.

Any extra prayers you can send up would be amazing and much appreciated and I'll leave you with a few quotes, which have seem to become my norm here :) 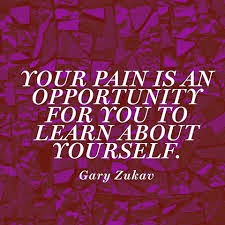 Never forget what you are going though always has something for you to learn. 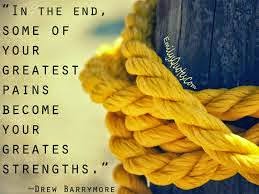 Let your struggle make you stronger 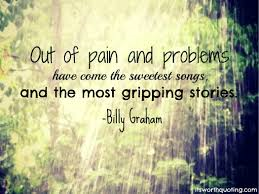