Sometimes it's Just One of Those Times

Picking a new team is scarier than scary. It's awesome though that my current Doctors are handpicking their replacements. (Yes, I still have not changed doctors since I moved almost 4 years ago; I just commute.) Look at me, sounding like we're putting together some elite task force, but what can I say, having the right people in place is essential for getting successful results... and as of right now, I need some good results.
I am currently and hopefully on the tail end of another migraine. The second in two and a half weeks, after not have one in months. I don't know if it is medication related but I cannot go back to dealing with these on a regular basis. Three days straight of intense pain and nausea, never knowing when the next will hit, is not living. It seriously zaps every ounce of positivity from my body... Not acceptable!!!
Which makes this so not the blog post that I've been mulling over for the past few days. I had every intention of posting a light-hearted, jab at myself over becoming a hermit since we moved and how much I actually enjoy life from my little piece of heaven.  I'm sure I'll feel like it soon enough. Sooner than later, I hope.
Despite some strange medical issues, these last few weeks have been laying the foundation for a great 2016 in my business and personal life... I just need to figure out how to tackle the latest hurdle... Quickly!!!
I'm determined to make this my year of getting control over this. There is no other option!!!
Until Next Time...

I've been fervently and repeatedly reminded over the past 8 days that rarely are our paths ever straight and that the best of intentions are just that, intentions.  No change comes from intentions alone.  We have to start small, plan even the baby steps, and hold ourselves accountable, so that we are putting our intent into action.

To say that I have been struggling over the past 8+ days would be explaining it mildly and cautiously.  I am not sure if it is my body, my mind, or my spirit needing rest or a combination of any/all or something else entirely but this "year" has already been a blur and I couldn't tell you what I have done so far because 1.) My mind is in a complete fog and 2.) It isn't much.  The daily tasks are a struggle, to the point of being nearly impossible to complete.  It's a feeling that I have experienced before but usually only after recovering from surgery or during and after an extremely rough flare... neither of which are currently in play.

I started this week with what I thought was a plan and by day one, I realized that it was all just intentions... a big TO DO list.  As the days passed, the TO DO list weighed on my heart and mind, adding to my unrest, but I just couldn't physically take the "step" to make an action plan.

It all let to my earlier stated reminder... The best of intentions are just that, intentions!  This morning I went back to the "drawing board" to break it down and plan out the steps.  Sure, there are times in life where "Just Do It" applies, but when you are struggling, it's okay to sit down, take a moment, and plan the baby steps.  I needed to hear that today, and if you are struggling also, I hope you take it to heart as well!!! 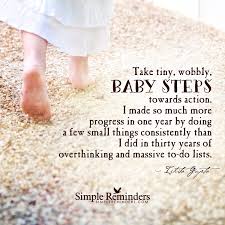 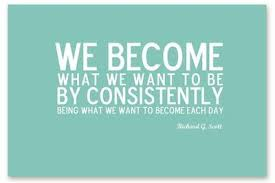 It Came in with a Bang

2016 definitely came in with a bang... and not the kind you would expect.  Our night at home was going along perfectly.  It was just the two of us sharing drinks, loading up on junk food, having the best 2 person dance party in our kitchen, and just talking... things that we rarely have time to do with the husband being gone so many hours of the day and our one day weekends spent catching up on projects around the house.  We thought we'd sit down and watch a movie since it was still so early and about an hour into it, I could feel my body tensing up.  It's a feeling I have felt way too many times in the past 4 years and was hoping it would stay right where it was and we could finish our evening but deep down I knew better.  By the end of the movie, my nerves were on full alert and my nausea was almost at full force.  I looked at my husband and said, "I'm getting a migraine, I have to go to bed now."

I've suffered from severe migraines now for about 4 years.  For about 2 years of the 4, I was getting them twice a week.  With the help of a neurologist, we got them down to once a week and finally after a year of trying different medications, once a month.  Back in September, I decided that I was done being loaded up on all these medications (that were starting to not consistently work) and that I wanted to start tapering off of them to see if the medications were actually even working anymore.  I read up on all the yuckiness of symptoms from tapering them off, got my prescriptions filled one last time and prepared for a rough month.  I ended up having to go out of town for a few weeks and realized that I didn't have enough medicine to fully step down and my doctor's office said that they needed to see me before they would refill my prescription again.  I was over 2,000 miles away, so that was not going to happen. So the crazy and frustration kicked in and I stopped "cold turkey".  Inside I was freaking out a little but I figured, I already suffer from migraines and Crohn's, it can't be much worse that either of those... and thank you God, other than feeling pretty off for a few days and some major dizziness, the transition went fairly well.  My body actually felt so much better not being on them.  My sleep wasn't based on taking something and praying for it to work... it felt weird realizing that I was actually sleeping better than I had been in a long, LONG time.  I was still having my daily morning headaches but no matter what we tried, that has been the norm for 4 years now.  Until NYE, (other than two "mild" and short lived migraines) it has been smooth sailing.

Let's just say that 2016 did not start like I'd hoped.  The shop stayed closed (even though I had plans to launch new merchandise), the lights stayed off, the bathroom stayed close, my water glass stayed full, the husband stayed quiet as a mouse (except to check on me), and after a failed attempt to get migraine medication down and broken blood vessels around both eyes from it getting lodged in my throat, I stayed in bed praying for even 30 minutes of sleep.  I've tried every natural remedy I've ever come across to get them to go away with no success and I tried almost all of them again yesterday to still no avail.  It took everything I had to not spend the day crying and to be honest, the only reason I didn't is because it would just have made my head hurt worse.  I wanted to be strong but I just couldn't find it within myself.  Here on the first day of the new year, I already felt defeated.  Completely out of my control, yet, I couldn't stop it from making me feel weak and broken.  It's crazy how much pain, of any kind, can consume you.  At midnight, I decided that I couldn't wait another 8 hours to try to take some medication again and I grinded up those darn pills and got them down.  The 2 year old on a Pixy Sticks sugar rush pounding on the drum set in my head has mellowed and he/she is currently lightly messing with the kick on the bass drum.  It's not over yet but I'll take it.  I don't feel human but I'm upright... and I'll gratefully take it.

It's good to remember that even though January 1st is the start of a new year, it doesn't decide what the rest of the year is going to look like.  Each day is a chance for a new start.  Some will be good, some will be bad, and some will be down right ugly, but the next day the sun still rises on a new beginning... and thank God for that!!! 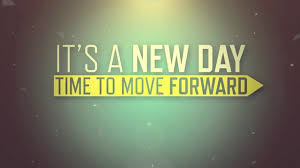